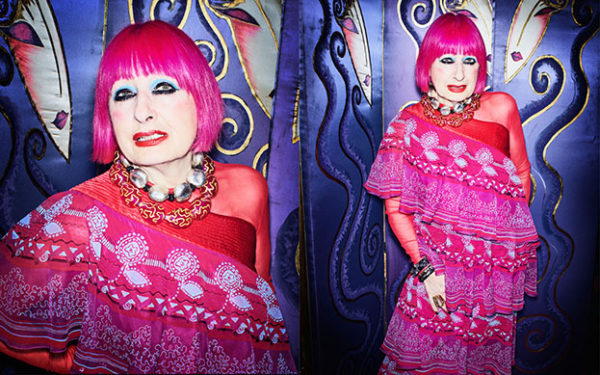 Friends and Patrons receive a discount of up to £15.00 on this event! Subscribe by signing up for Friend Subscription or Patron Subscription. Already a Friend or Patron? Please log in

We are thrilled to have the fabulous Dame Zandra Rhodes DBE join us in person as we visit Zandra Rhodes: 50 Years of Fabulous.

The acclaimed British designer founded her eponymous fashion house in 1969. Her prints were Pop Art-infused commentaries on the world of Sixties Britain; the designer felt that there was inherent structure within the pattern that could work with and enhance the shape and construction of a dress. With this concept as a starting point and with her distinctive approach to cut and form, the house of Zandra Rhodes soon became one of the most recognisable labels in London. In celebration of fifty years of the Zandra Rhodes’ label, the Fashion and Textile Museum presents a retrospective highlighting more than 50 key looks, as well as 30 original textiles, and exploring five decades of the distinguished career of a British design legend.